When an emergency occurs in a hospital, a color code is used to quickly communicate the nature of the emergency to all staff, who then set in motion the appropriate protocol. One of the codes that requires the biggest response from physicians and the Director of Professional Services (DPS) is Code Orange. This signifies a natural disaster or major event with mass casualties.

To respond effectively to a Code Orange, hospital staff must quickly organize themselves to greet patients, regardless of the workload or situation in the hospital. Having rapid access to up-to-date information on physicians’ availability and their contact information becomes vitally important for both hospital and patients.

The use of digital physician on-call schedules can play a decisive role in reducing communication times between providers, which becomes particularly crucial in emergency situations.

The Importance of Being Well Prepared for a Code Orange

Being well prepared for a Code Orange can have a major impact on the lives of patients in critical situations. This is why some health organizations sometimes join forces to set up Code Orange simulations.

In October 2018, for example, the McGill University Health Centre, the Montreal Children's Hospital and Sacré-Coeur-de-Montréal Hospital organized a Code Orange simulation to respond to the following fictional scenario: a driver had run into a crowd and then fired shots at passers-by. About twenty mock pediatric patients participated in the exercise, in addition to the mannequins used in the various hospitals.

Similar simulations have taken place in Montreal in the past enacting the following scenarios: an explosion in the Metro, a massive contamination and a plane crash. Each scenario involved dozens of "fake victims" and a number of participating organizations, such as the Canadian Armed Forces, police services, Sûreté du Québec, Société de transport de Montréal (STM) and medical personnel in many health facilities.

One month to the day before the Code Orange simulation in Montreal in October 2018, a school bus accident in Hawkesbury triggered a real Code Orange. Staff at Hawkesbury General Hospital were alerted to the fact that the hospital would be receiving 25 children who were injured or in shock – within the next 15 minutes. To effectively manage the situation, Hawkesbury General Hospital’s Director of Professional Services (DPS) needed to know which physicians were available, where they were and how to contact them quickly.

The digital physician on-call schedules used by Hawkesbury General Hospital contributed to the efficient management of that Code Orange by allowing the DPS to access all the necessary information from a mobile device and communicate rapidly with the physicians involved. In less than 20 minutes, more than a dozen were on site, ready to help the children.

An operation like this would have been much more difficult if the Code Orange had occurred before Hawkesbury General Hospital digitized the schedules of its on-call physicians. A paper-based management schedule would certainly have slowed communication, since all that information on physicians’ availability and contact details would have been dispersed across different media and different medical services, rather than being centralized and updated in real time.

When the on-call schedules of a hospital's medical staff are fully digitized, centralized and accessible from the mobile devices of authorized hospital personnel, the communication is so much faster. This results in speedier patient management and a lower risk of complications in emergency situations. 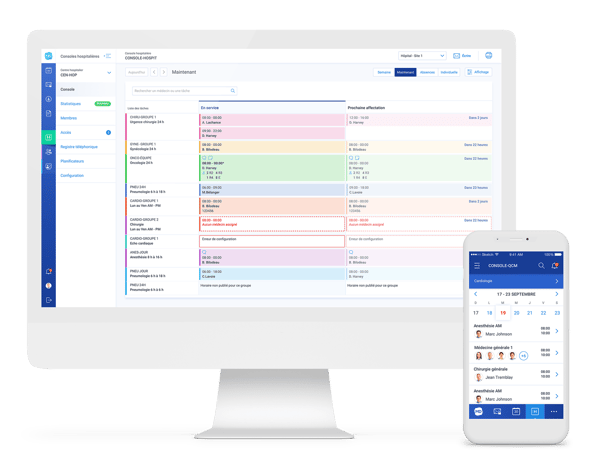 For more information on the possibility of digitizing physician schedules in your health care facility, do not hesitate to contact the PetalMD team at 1-888-949-8601 or consult the case studies available on this subject.

How to Prevent Gaps in On-Call Coverage?

When a patient is admitted to the intensive care unit during the night, hospital staff must reach an on-call...

4 Ways to Optimize the Coordination of On-Call Physicians

Designed in collaboration with doctors and health managers, Petal On-Call is a Web-based solution developed by...